Wine
of the
Month

$15
Norton is our Dry Red wine that has been aged in 100% American Oak Barrels. The oak flavor is apparent in this wine but there are additional subtle splashes of plum and vanilla.

$15
Chardonel A hybrid of Chardonnay and Seval Blanc with a smoothness like no-other that has accents of vanilla with a citrus finish.

$14
Lincoln’s Noose is a fresh, floral yet fruity aroma mixed with hints of citrus and spices. This wine offers a unique yet perfect balance with a clean finish.

$14
1812 is a smooth, semi-sweet white wine with traces of vanilla that is bound to please any wine drinker.

$15
Vishnu Springs Vignoles is a fruity white wine variation that offers tropical and pineapple accents. This is a crisp citrus wine that will always please the masses.

$14
Black Hawk is our unique wine with a fruity and spicy taste. The sweetness creates just the right amount of balance between the fruit and the spice.

$12
Horselick is a sweet and beautifully colored wine that offers a luscious Concord taste with subtle hints of cherry upon finish.

$13
Hogwash is one of our sweet, fruity wines that’s made from the Niagara grape. This wine has a fruity and floral bouquet twist with a hint of pear that makes for a smooth finish.

$14
Poppin’ Cherry is our delicious Cherry wine that’s full of flavor and is sure to “Pop” right in your mouth.

Bare it All Blackberry

$14
Bare it all Blackberry is our sweet candied blackberry wine that will literally go down like liquid candy.

$14
Chocolate Strawberry is our perfect little treat! This is a sweet and fruity red wine with a little twist. Take a touch of natural chocolate with starwberry flavors and you’ll have this perfect dessert wine.

$13
Season’s Drinkings is a light and fruity wine that we make from our Catawba grapes grown right here on site. With a touch of cinnamon this is truly the perfect wine for the holidays.

$12
Bear Creek Blush is here in time for Summer! It’s our newest Blush that every wine drinker has to try.

$14
Feelin’ Peachy is our newest wine we’re introducing this summer! It’s a must try for every peach lover.

"This option is currently limited to the state of Illinois. For additional state shipping options please use Vino Shipper."

Our Wines can be found in several retail outlets, listed below are some locations we proudly distribute to.

For any questions regarding available wines in your surrounding area please call your local retailer for details. 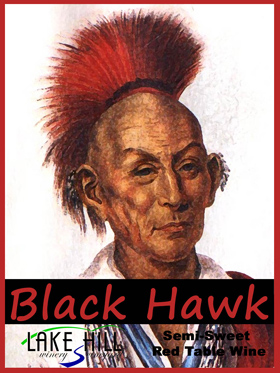 Black Hawk was a famous leader and warrior of the Sauk American Indian Tribe. His fame came from leading war parties and the “Black Hawk War of 1832” which was named after him. Black Hawk is one of the most famous Native Americans and has several local ties. His first documented fight against US forces was at the newly constructed Fort Madison in Iowa. His chief rival in his tribe was Keokuk, who Keokuk, Iowa, was named after. Black Hawk died in 1838, in Southeast Iowa. 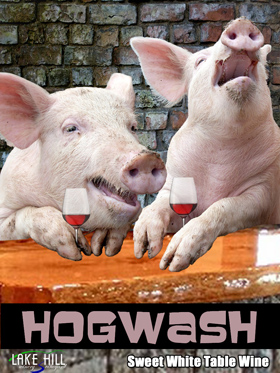 Illinois is one of the top 5 states for pork production and is continually growing through businesses like Carthage Veterinary Service, Ltd. and Professional Swine Management, LLC. Dedicated to helping farmers ensure the health and quality of their animals, these businesses put Carthage on the map as home to one of the top 10 pork powerhouses in the Midwest. So pull up to the bar, and drink like a hog! Cause’ this ain’t your ordinary hogwash! 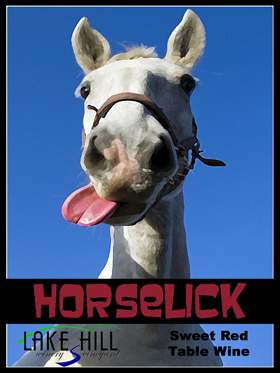 Horselick was the original name of a town in Northeast Hancock County. In 1835, the name was changed to Fountain Green because of a free-flowing spring at the edge of town. This area was known as Lincoln country because of the Mordecai Lincoln family which had located there. Mordecai Lincoln was an uncle of the future president, Abraham Lincoln. Many of the Lincolns are buried in a cemetery just East of Fountain Green, known as the Lincoln Cemetery. 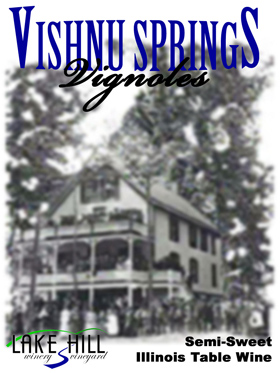 Hidden down a long country road remains the ghost town of Vishnu Springs. Located along the Lamoine River, lies a once sought after community containing a spring said to have supernatural healing powers. Thousands have traveled from afar to drink the spring water in hopes that their aliments would be cured. The Capital Hotel was constructed to house the travelers, and is the only establishment that remains today. It is rumored that those that were not cured by the water died in the hotel, and still live there today. 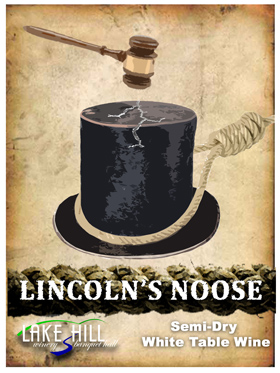 In the history of Hancock County, there has only been one legal hanging. This was Efram Fraim, who had been convicted of murder. He was defended by a roaming country attorney, named Abraham Lincoln. An appeal was made but proved unsuccessful. Because Carthage had no jail at the time, Fraim was housed in the courthouse next to the local school. During this time, he became friends with many of the school children. On the day he was hung, most of the town, including the school children, showed up to watch the epic event. 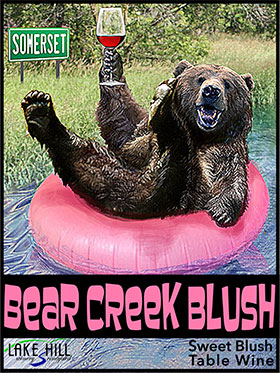 Just Southwest of Carthage lies Bear Creek Township. Basco, Illinois once known as “Somerset” is the only village in the township. Gabriel Marlot who lived near Bear Creek was well known throughout the state for the grapes grown in his vineyard. Gabriel won 1st Place at the 17th Annual Illinois State Fair in 1869 for “Best Two Bottles of Catawba” and “Best Two Bottles of Concord”. Our Bear Creek Blush is a delightful combination of these two varietals and are grown right here in our vineyard! Cheers, Gabriel!

We are so excited to introduce our new wine Feelin' Peachy!

Wine of the Month!

This Month's wine is Feelin' Peachy!

What's the Buzz about?

If you haven't tried this amazing mead yet get out here now and try this delicious drink!